Phenological shifts, induced by global warming, can lead to mismatch between closely interacting species. The eastern spruce budworm, Choristoneura fumiferana, an important outbreaking insect defoliator in North America, mainly feeds on balsam fir, Abies balsamea, which has historically been well synchronized with the insect. But as climate change pushes the northern range limit of the budworm further north into the boreal forest, the highly valuable black spruce, Picea mariana, historically protected against the budworm by its late budburst phenology, is suffering increased defoliation during the current outbreak. We tested the hypothesis that rising temperatures can lead, not to a mismatch, but to an improved match between the budworm and black spruce through differential phenological advancement. For 3 years, eastern spruce budworm larvae were reared from instar 2 to pupae, on both black spruce and balsam fir, in a temperature free-air controlled enhancement experiment (T-FACE) consisting in 24 field plots, half of which were heated at +2°C from March to October. Our results show that every year, larval development was faster on heated trees and pupation was earlier than on unheated trees. Bud development was also accelerated in heated trees of both species. However, there was no difference in mass between pupae that developed at +2°C and controls at the end of the season. Finally, we found no difference either in development rate or pupal mass between larvae reared on black spruce and those reared on balsam fir. This suggests that under higher temperature regimes, eastern spruce budworm will be as successful on black spruce as on balsam fir, as black spruce budburst becomes better synchronized with the insect's emergence from diapause. This could lead to critical changes in outbreak dynamics and severity with important ecological state shifts at the landscape level. 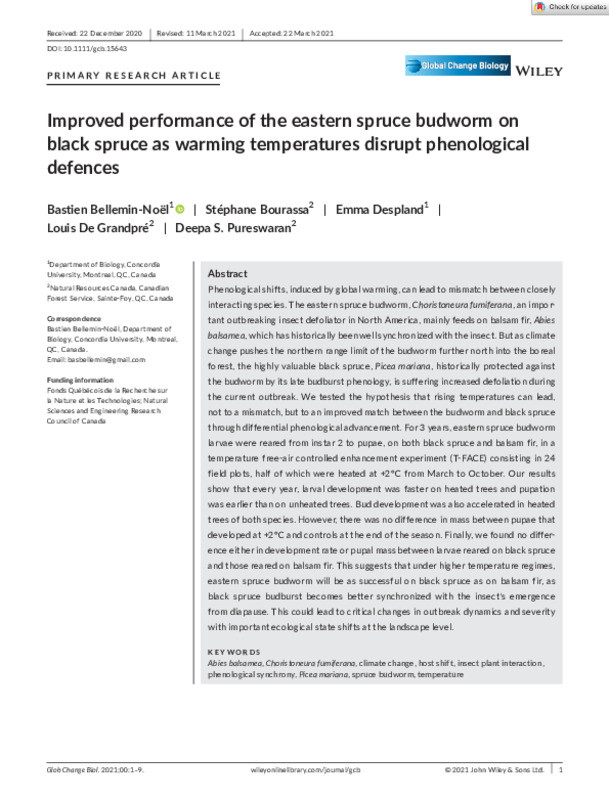