Multiple constraints (e.g., time, funding, expertise) can impede the broad-scale monitoring of human-induced loss of biodiversity. Non-random species co-occurrence provides an opportunity to estimate local species richness by tracking only a few species that are indicators of more global assemblages. Despite promising fine-scale studies, it remains unclear whether such indicator species remain effective over broad spatial extents. We assessed the value of indicator species to consistently predict species richness despite variation in short-term (5–9 years) climate conditions. Our study involves 22,041 point-count stations distributed over 1.75 M km2 of Canadian boreal forest, where 197,000 birds from 216 species were detected. Using null model analysis of species co-occurrence followed by regression analysis, we identified the minimum set of indicator species that can predict 70% of spatial variation in local bird richness in each of eight short-term climate regions. We found that indicators were non-random subsets of the species pool, as they were species whose presence explained a relatively high percentage of variations in species richness within the short-term climate region, and those sharing a relatively high number of significant pairwise associations. Although only 11 to 26 indicator species were needed to predict species richness at the regional scale, 57 of the 216 species pool (26%) were necessary to make predictions over the entire study area. This large number reflects regional variations in the best indicator species, and those that remained indicators in several regions were representative of different species assemblages. Our observations thus cast doubts on the use of indicator species as an effective and efficient tool for biodiversity monitoring under changing climate conditions. Broad-scale (spatial or temporal) use of indicators thus comes with the colossal challenge of having to determine under which new conditions a given set of indicators must be replaced by another, and by which one. 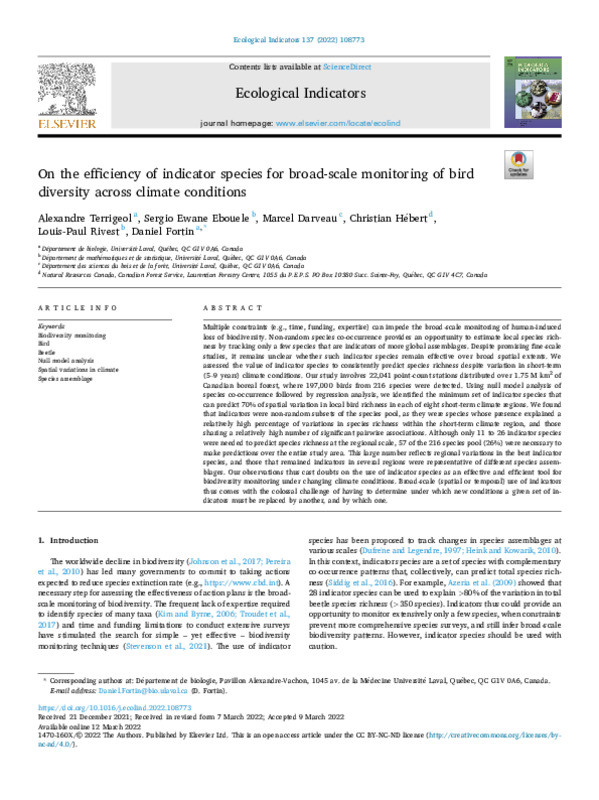