Managing forests and forest products has substantial potential to help mitigate climate change but the cost has not been extensively examined in Canada. We estimated the cost of seven forest-related mitigation strategies in Canada’s 230 million hectares of managed forest, divided into 32 spatial units. For each strategy and spatial unit, we determined forest sector mitigation cost per tonne (t) using estimated impacts on forest sector greenhouse gas emissions and removals and net revenue. National cost curves showed that mitigation averaged 11.0 Mt CO2e·year–1 in 2015–2050 at costs below $50·t CO2e–1 for a strategy of increased recovery of harvested biomass, increased salvage, extraction of harvest residues for bioenergy, and increased production of longer lived products. We also examined national portfolios in which the strategy selected for each spatial unit (from among the seven examined) was chosen to maximize mitigation or minimize costs. At low levels of mitigation, portfolios chosen to minimize costs were much cheaper than those that maximized mitigation, but overall, they yielded less than half the total mitigation of the latter portfolios. Choosing strategies to maximize mitigation in 2015–2050 yielded an average of 16.5 Mt· year–1 at costs below $50·t CO2e–1. Our analysis suggests that forest-related strategies may be cost-effective choices to help achieve long-term emission reductions in Canada.

A 2014 paper by NRCan researchers showed substantial potential for Canadian forest management and harvested wood to contribute to climate change mitigation by reducing greenhouse gas (GHG) emissions or increasing carbon removals (Smyth et al., Biogeosciences, www.biogeosciences.net/11/3515/2014). This companion paper estimates the forest sector cost of this mitigation by examining the economics of strategies in 32 spatial units making up Canada’s 230 Mha managed forest. For each strategy in each spatial unit the mitigation cost per tonne was estimated by combining the strategy impacts on forest sector GHGs derived in the earlier paper with impacts on forest sector net revenue estimated in this paper. National cost curves were derived that showed how mitigation costs per tonne changed with the level of mitigation achieved. Choosing strategies to maximize cumulative forest sector mitigation through to 2050 resulted in a national average of 20 MtCO2e/year in 2015-2050 at all levels of forest sector cost, with 16 Mt/year at a cost under $50/tCO2e. Displacement effects in other sectors, as wood products and bioenergy substituted for other, more emission-intensive products and fossil fuels, added another 7 Mt/yr. The authors concluded that, when considered to 2030 and beyond, the forest sector can provide cost-effective mitigation in Canada, provided strategies are implemented soon. This paper is the first in-depth national examination of the economics of multiple forest sector mitigation strategies in Canada and was undertaken with input of provincial and territorial governments through the National Forest Sinks Committee. 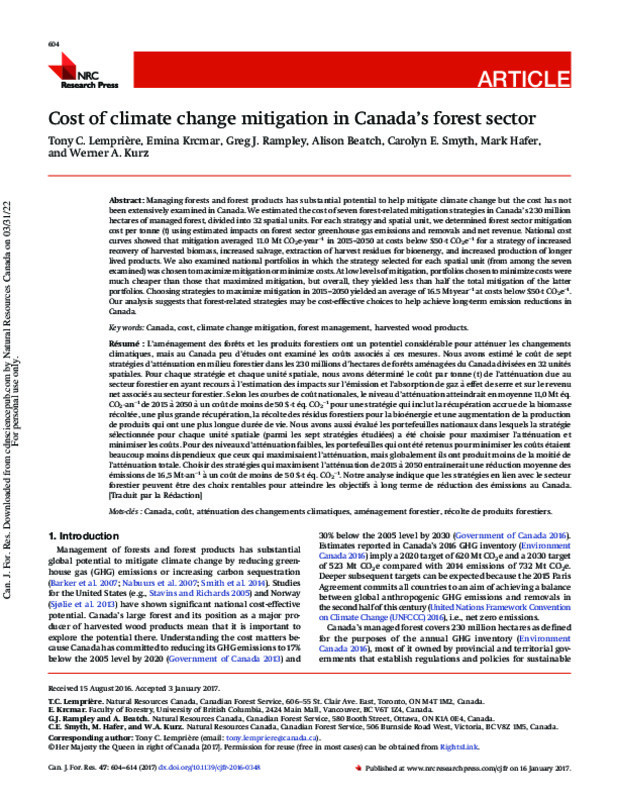