Effective species conservation efforts require insight into whether a species’ extent of occurrence may shift due to changing climate, habitat loss, or both. The extent of occurrence of the threatened boreal population of woodland caribou (Rangifer tarandus caribou; caribou) has contracted due to environmental and anthropogenic disruption, with further contractions predicted as boreal habitat shifts with the changing climate. However, the direct and indirect climate drivers of caribou extent of occurrence have not been explicitly investigated. We estimated and compared the influence of climate and habitat drivers on the occurrence of caribou ranges across the Canadian boreal forest. We fit path models that estimated the direct effects of climate on caribou range occurrence and its indirect effect through climate's influence on caribou habitat (i.e., forest cover, presence of peatland, human disturbance and wildfire). Our analysis suggests that the distribution of caribou ranges is less sensitive to the direct effects of climate than to those of habitat and human disturbance. However, through its relationship to caribou habitat, climate exerts indirect influence over the distribution of caribou. As the climate changes, future distributions of caribou may be more heavily relegated to refuge habitats, particularly peatlands in the western boreal forest. Our biogeographical approach enables more informed decisions for large-scale caribou conservation efforts (e.g. establishment of protected areas, habitat restoration) that account for potential shifts in the distribution of caribou under changing environmental and climatic conditions. 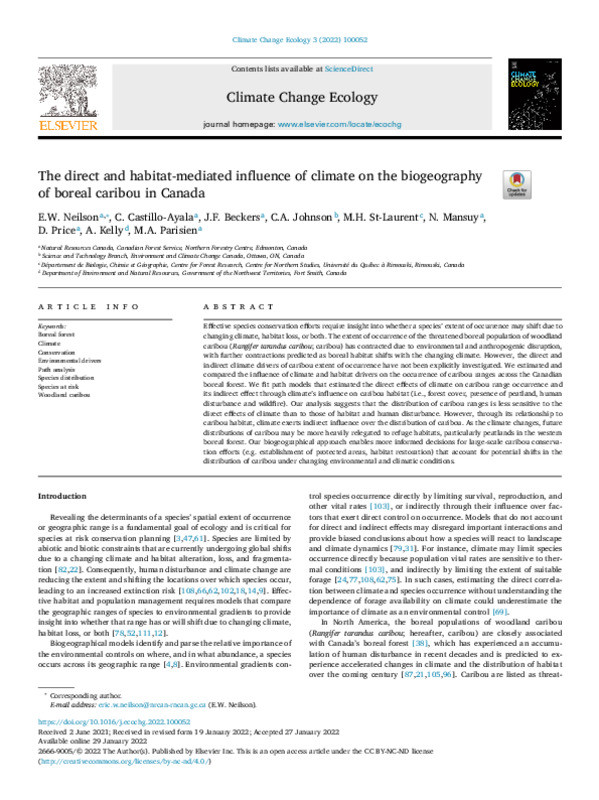