The climate in Canada’s north has changed over the past 70 years. Indeed, mean annual temperature in the Northwest Territories has increased by 2°C to 4°C since record keeping began in 1950. Annual precipitation amounts and patterns have also changed during this period. These and other changes have already noticeably affected the appearance and function of northern forested ecosystems and will continue to do so into the future. As such, the Government of Northwest Territories and the Canadian Forest Service have collaborated to produce this baseline report summarizing the current ecological conditions of forested ecosystems in the Northwest Territories and identifying gaps in our understanding of northern forests and ecosystem processes. Key findings presented in this report include the following: 1) upland forests in western Northwest Territories, the most productive forests in the territory, experienced net negative growth trends between 1950 and 2002, which were correlated with reduced soil moisture; 2) permafrost has begun thawing across southern and central portions of the territory, which has been linked to localized flooding and will eventually lead to replacement of coniferous forests with shrub- and moss-dominated plant communities; 3) changes in wildfire frequency and intensity in recent decades will, over the long-term, alter the species composition of northern forests; 4) biotic and abiotic disturbances have become more common in the north and, during severe occurrences, will cause permanent damage to forests; 5) upland and peat plateau forests in the Northwest Territories have historically been roughly carbon neutral, but permafrost thaw and more intense wildfires are expected to increase carbon emissions from these forests; and 6) boreal caribou populations are currently considered self-sustaining in the Northwest Territories, but high-quality caribou habitat is at risk of degradation from wildfire, permafrost thaw, and increasing amounts of human development.

Canada’s climate is changing, especially in the north. Since 1950, average yearly temperatures in the Northwest Territories have increased by more than 2°C. This rate of increase is two to four times higher than increases in the rest of Canada. Yearly rain and snowfall amounts have also changed in the Northwest Territories, with some areas receiving more precipitation and others receiving less. These changes are already influencing northern forests through more frequent and more severe wildfires, floods, and droughts, as well as melting of the permafrost and the occurrence of forest insect and disease outbreaks at locations farther north than ever previously recorded. These types of changes will continue in the future, which means the forests of the Northwest Territories will continue to change in both predictable and unpredictable ways. These changes will in turn affect forest values like wildlife habitat. They will also alter the forest resources that are available to local residents. To better understand these impacts, the Government of Northwest Territories has partnered with the Canadian Forest Service to assess the vulnerability of the territory’s forests to climate change. The first stage of this assessment is to prepare this baseline report. The report summarizes current ecological conditions of forests in the Northwest Territories, describes how the area’s climate is expected to change in future decades, and explains how these changes are expected to alter forests and the values they provide. This report contains baseline ecological information on the following themes: climate, forest types and productivity, permafrost, wildfire, forest insects and diseases, flooding, drought, carbon balance, and caribou habitat. 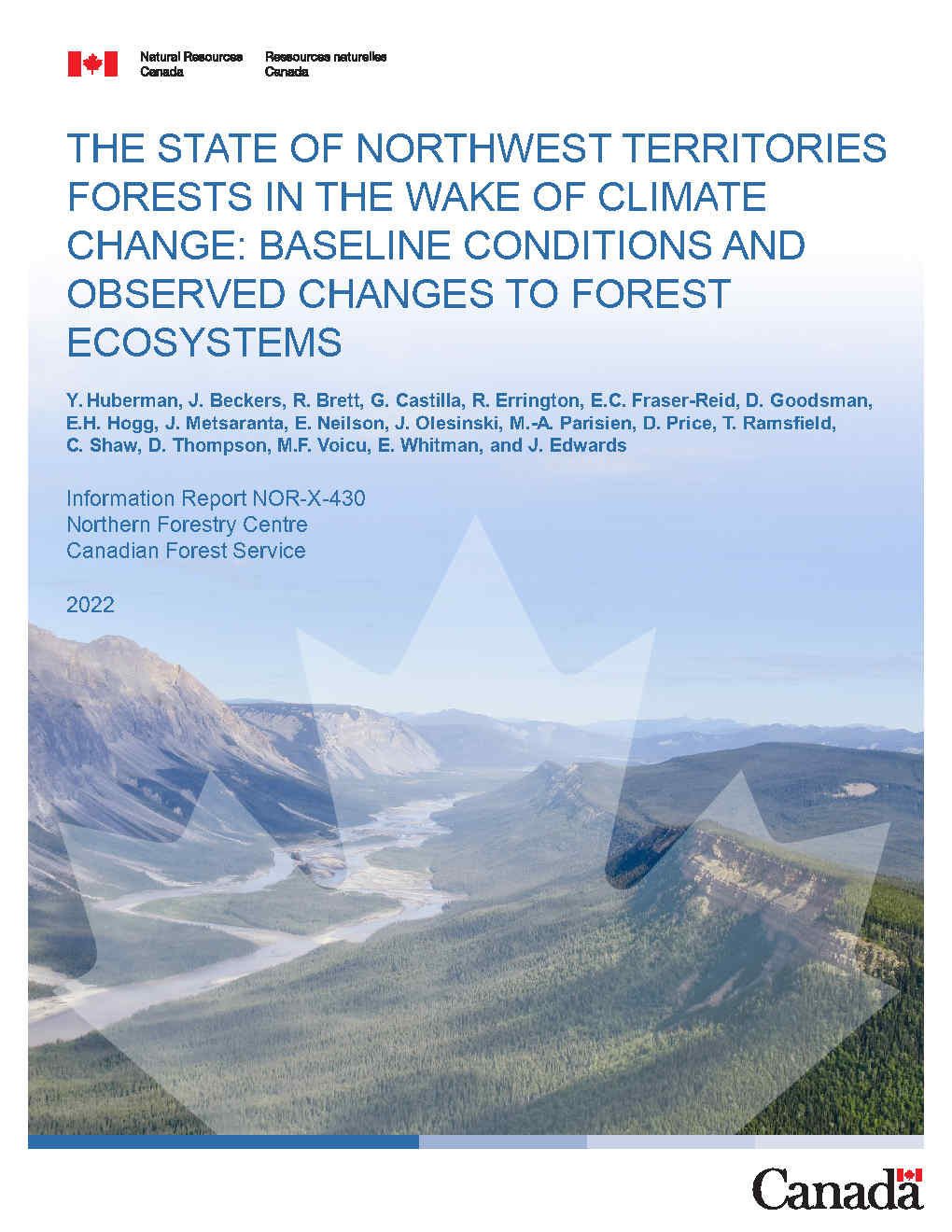