We reviewed recent literature to identify the positive and negative effects of thinning on both stand- and treelevel resistance and resilience to four stressors that are expected to increase in frequency and/or severity due to global change: (1) drought, (2) fire, (3) insects and pathogens, and (4) wind. There is strong evidence that thinning, particularly heavy thinning, reduces the impact of drought and also the risk and severity of fire when harvest slash is burned or removed. Thinning also increases the growth and vigor of residual trees, making them less susceptible to eruptive insects and pathogens, while targeted removal of host species, susceptible individuals and infected trees can slow the spread of outbreaks. However, the evidence that thinning has consistent positive effects is limited to a few insects and pathogens, and negative effects on root rot infection severity were also reported. At this point, our review reveals insufficient evidence from rigorous experiments to draw general conclusions. Although thinning initially increases the risk of windthrow, there is good evidence that thinning young stands reduces the long-term risk by promoting the development of structural roots and favouring the acclimation of trees to high wind loads. While our review suggests that thinning should not be promoted as a tool that will universally increase the resistance and resilience of forests, current evidence suggests that thinning could still be an effective tool to reduce forest vulnerability to several stressors, creating a window of opportunity to implement longer term adaptive management strategies such as assisted migration. We highlight knowledge gaps that should be targeted by future research to assess the potential contribution of thinning to adaptive forest management. One of these gaps is that studies from boreal and tropical regions are drastically underrepresented, with almost no studies conducted in Asia and the southern hemisphere. Empirical evidence from these regions is urgently needed to allow broader-scale conclusions 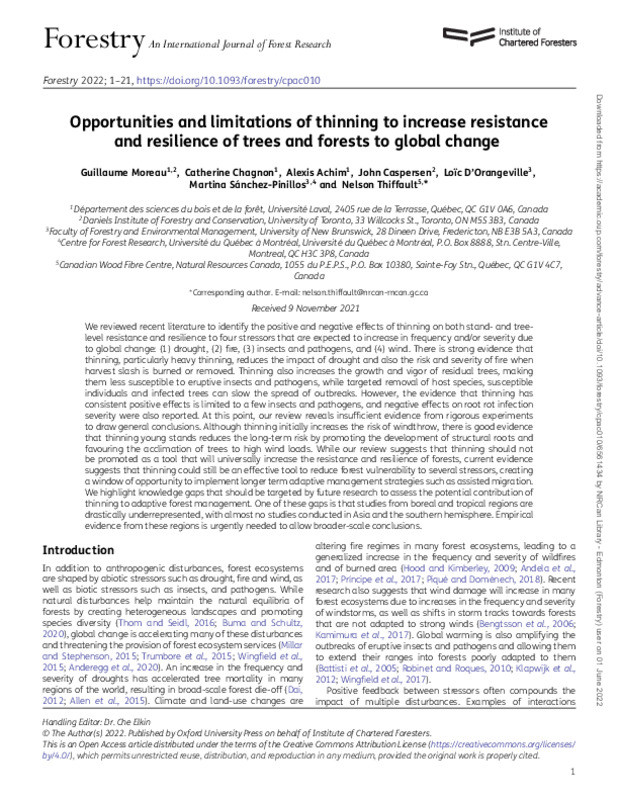