With climate change, increasingly intense and frequent drought episodes will be affecting water availability for boreal tree species, prompting tree breeders and forest managers to consider adaptation to drought stress as a priority in their reforestation efforts. We used a 19-year-old polycross progeny test of the model conifer white spruce (Picea glauca) replicated on two sites affected by distinct drought episodes at different ages to estimate the genetic control and the potential for improvement of drought response in addition to conventional cumulative growth and wood quality traits. Drought response components were measured from dendrochronological signatures matching drought episodes in wood ring increment cores. We found that trees with more vigorous growth during their lifespan resisted better during the current year of a drought episode when the drought had more severe effects. Phenotypic data were also analyzed using genomic prediction (GBLUP) relying on the genomic relationship matrix of multi-locus gene SNP marker information, and conventional analysis (ABLUP) based on validated pedigree information. The accuracy of predicted breeding values for drought response components was marginally lower than that for conventional traits and comparable between GBLUP and ABLUP. Genetic correlations were generally low and nonsignificant between drought response components and conventional traits, except for resistance which was positively correlated to tree height. Heritability estimates for the components of drought response were slightly lower than for conventional traits, but similar single-trait genetic gains could be obtained. Multi-trait genomic selection simulations indicated that it was possible to improve simultaneously for all traits on both sites while sacrificing little on gain in tree height. In a context of rapid climate change, our results suggest that with careful phenotypic assessment, drought response may be considered in multi-trait improvement of white spruce, with accelerated screening of large numbers of candidates and selection at young age with genomic selection. 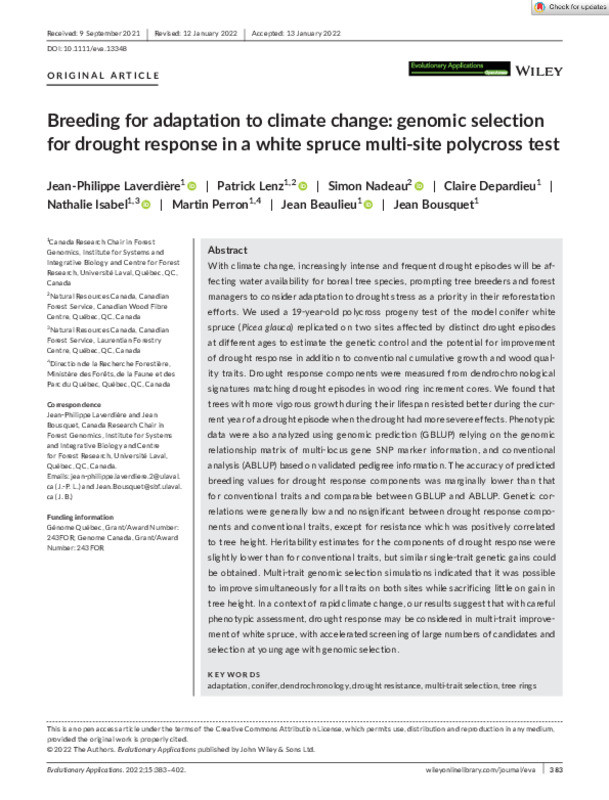