Climate change refugia are areas that are relatively buffered from contemporary climate change and may be important safe havens for wildlife and plants under anthropogenic climate change. Topographic variation is an important driver of thermal heterogeneity, but it is limited in relatively flat landscapes, such as the boreal plain and prairie regions of western Canada. Topographic variation within this region is mostly restricted to river valleys and hill systems, and their effects on local climates are not well documented. We sought to quantify thermal heterogeneity as a function of topography and vegetation cover within major valleys and hill systems across the boreal–grassland transition zone.

Using iButton data loggers, we monitored local temperature at four hills and 12 river valley systems that comprised a wide range of habitats and ecosystems in Alberta, Canada (N = 240), between 2014 and 2020. We then modeled monthly temperature by season as a function of topography and different vegetation cover types using general linear mixed effect models.

Summer maximum temperatures (Tmax) varied nearly 6°C across the elevation gradient sampled. Local summer mean (Tmean) and maximum (Tmax) temperatures on steep, north-facing slopes (i.e., low levels of potential solar radiation) were up to 0.70°C and 2.90°C cooler than highly exposed areas, respectively. Tmax in incised valleys was between 0.26 and 0.28°C cooler than other landforms, whereas areas with greater terrain roughness experienced maximum temperatures that were up to 1.62°C cooler. We also found that forest cover buffered temperatures locally, with coniferous and mixedwood forests decreasing summer Tmean from 0.23 to 0.72°C and increasing winter Tmin by up to 2°C, relative to non-forested areas.

Spatial predictions of temperatures from iButton data loggers were similar to a gridded climate product (ClimateNA), but the difference between them increased with potential solar radiation, vegetation cover, and terrain roughness.

Species that can track their climate niche may be able to compensate for regional climate warming through local migrations to cooler microsites. Topographic and vegetation characteristics that are related to cooler local climates should be considered in the evaluation of future climate change impacts and to identify potential refugia from climate change. 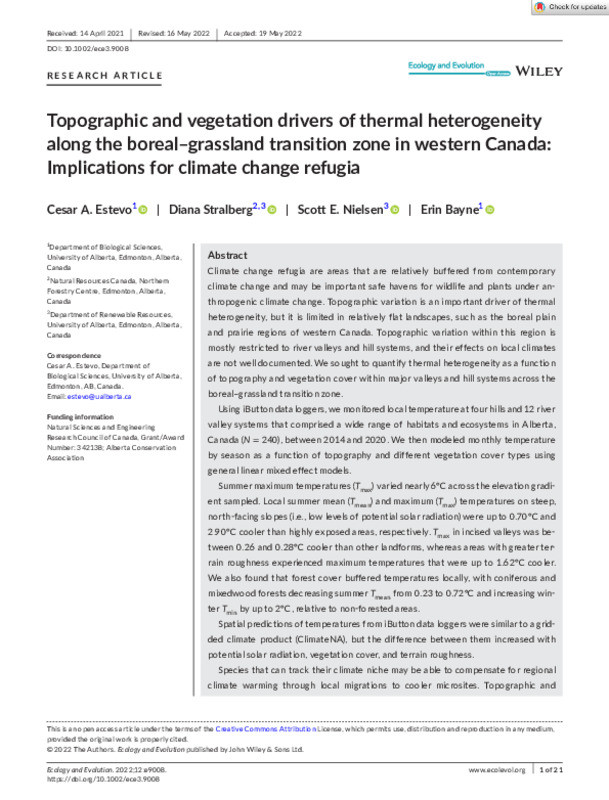