A reproductive population of the Asian longhorned beetle, Anoplophora glabripennis (Motschulsky) (Coleoptera: Cerambycidae), an adventive insect from Asia, was discovered in 2003 in an urban landscape in Ontario, Canada. This polyphagous beetle, which attacks maples, Acer spp. (Sapindaceae), had the potential to seriously and permanently alter the composition and structure of forests in eastern North America. The Canadian Food Inspection Agency (CFIA) developed and implemented an eradication programme, with partners from various agencies in both Canada and the United States of America. Surveys were used to delineate the infestation and establish a regulated area around it. Treatment consisted of removing and destroying both trees with signs of A. glabripennis injury and trees assumed at high risk of being injured within the regulated area. After nine years of monitoring the regulated area, the CFIA declared A. glabripennis eradicated on 5 April 2013. Herein, we detail the response undertaken, summarise lessons learned, and provide preliminary observations and results pertaining to the arrival, establishment, and spread of A. glabripennis in Ontario.

An infestation of the Asian longhorned beetle, Anoplophora glabripennis, was discovered in 2003 in the Greater Toronto Area (GTA). This insect is native to Asia, but can attack many types of broadleaf trees commonly found across Canada, including maple, willow, poplar and elm. The beetle’s wide range of hosts and destructive behaviour gives it the potential to seriously and permanently alter Canada’s forests if allowed to establish. In response to this invasion, Canada implemented a multi-agency eradication program, led by the Canadian Food Inspection Agency (CFIA), and supported by other agencies from both Canada and the United States of America. In this article we document all phases of the program, from the initial efforts to detect the pest prior to it’s discovery in 2003, through the delimitation surveys and treatment phase, to nine years of monitoring the regulated area for residual populations. We summarise the lessons we learned during the eradication program, we provide some preliminary results on how this insect arrived, established and spread in Ontario, and we document the methods we used to collect research data on this insect that will be analysed and presented in subsequent publications. 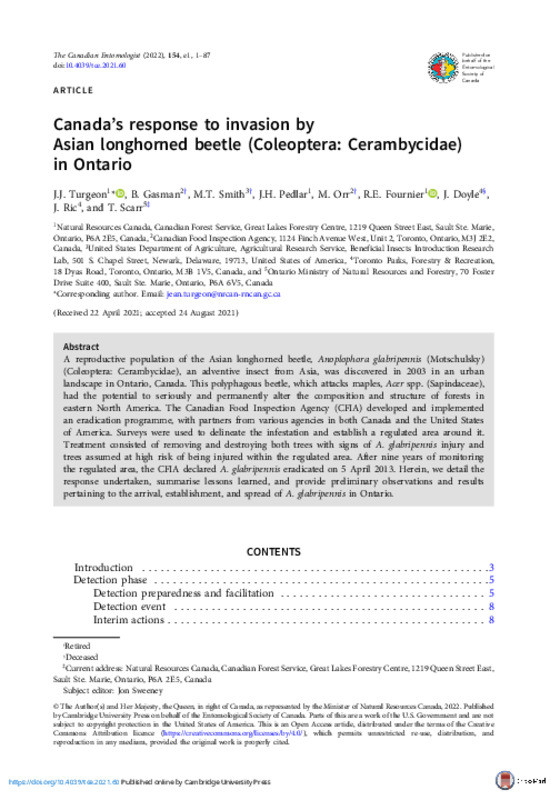