Remote assessment of burn severity: A pilot study in landscape fi re monitoring

Parks Canada fire policy is based on fire restoration, as part of the ecological integrity mandate, as well as protection from the dangers of uncontrolled wildfires. On all fires, monitoring of some level of fire impacts is mandated; however, post-fire monitoring can be expensive and hazardous, and has frequently been neglected. This project involved testing a remote sensing method for monitoring the severity of individual fire events, where severity is taken to mean the magnitude of ecological change caused by fire. Methodology was closely based on the US interagency FIREMON/Landscape Assessment (FLA) protocols, which were attempted on four 2005 and 2006 fires in western parks. The FLA process involves the use of pre- and post-fire Landsat satellite imagery to create a raster grid map of burn severity levels, termed the differential Normalized Burn Ratio (dNBR). These dNBR grids are validated on field plots, where Composite Burn Index (CBI) values – metrics for assessing overall fire effects on vegetation and soil – are assessed. Statistical correlation models are used to evaluate the relationship between CBI and dNBR values and for making predictions regarding the overall effects of a fire. In this project, these methods were used to evaluate the area of each fire that resulted in high severity fire effects, defined as CBI > 2.2. For three of the four fires tested, in forest ecosystems, correlation coefficients (R2) were all greater than 0.5 (most were > 0.7), indicating that most of the variability in dNBR values was captured by the CBI. As described in the text, the Hoodoo (Yoho NP, 2005), Peace Point#1 (Wood Buffalo NP, 2005) and Southesk (Jasper NP, 2006) fires resulted in 31%, 25% and 57% high severity fire effects, respectively. On the fourth fire (Gebhart fire, Grassland NP, 2006), in a grassland ecosystem, it was not possible to use the CBI methods due to the vigorous post-fire regrowth. It was apparent that the Gebhart fire, overall, was a very low severity event, but additional experimentation will be needed to develop appropriate methods (if possible) for remotelysensed monitoring of grasslands fires. This pilot study was considered successful, and these methods are currently being expanded in a larger investigation designed for system-wide operational fire effects monitoring. Problems and challenges to be addressed in future trials include image georeferencing in the absence of control points (especially in remote areas), ensuring that enough CBI plots are measured, acquisition and timing of appropriate Landsat images, and interpretation of various severity levels in different vegetation types . 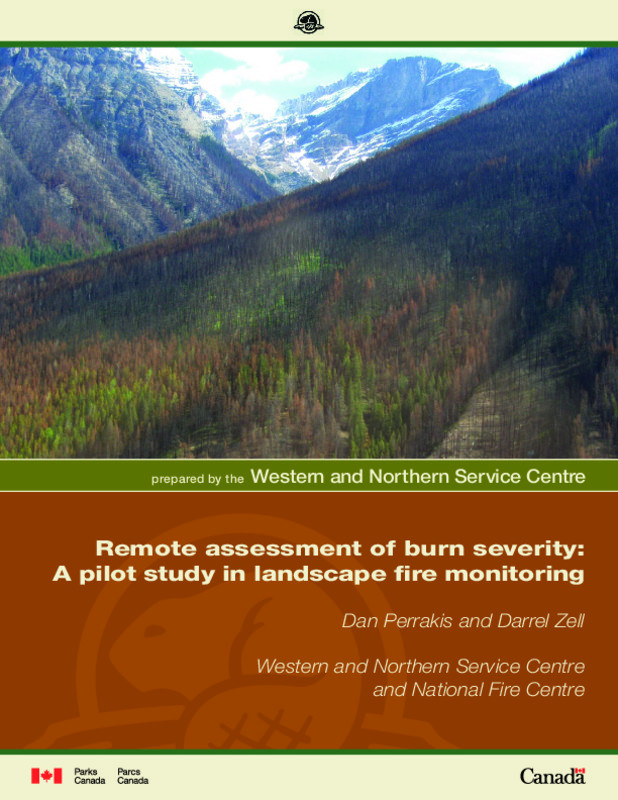