Analytical techniques for estimating time trends and projections of breeding values from sparse data, unbalanced mating designs, and irregular assessments periods are presented and discussed. Time trends (ages 4 to 23) in genetic parameters of tree heights in 14-18 full-sib Douglas-fir (Pseudotsuga menziesii [Mirb.] Franco) crosses among six male trees from Coastal B.C. and six female trees from Washington and Oregon planted on four test sites on Vancouver Island were examined, and tentative projections of genetic gains were made. Annual height estimates were derived by fitting splines to height measures at ages 4, 7, 12, 18, and 23 yr. Genetic variances were derived from direct computations of covariances among all possible half-sib combinations; a method deemed superior to the conventional factorial analysis. Irregular fluctuations in genetic parameter estimates vanished after minor adjustments (<1.5%) of variance-covariance matrices with negative eigenvalues. Sites effects were highly significant (P < 0.001), but site-to-site correlations for pair-cross means were all nonsignificant (P > 0.10). Additive genetic control of height growth was weak to moderate (h^2 ca. 0.1, but generally increasing with age). The best genetic discrimination was observed on the more productive sites. A stable ranking of full-sib family means was reached at age 7 yr on one site versus age 18 for the other sites. Trends in breeding values were described with a mixed linear autoregressive time series model from which 10-yr projections were made. Projections took into consideration both the error structure surrounding the breeding values and the errors of the parameter estimates in the time series model. Selection of the best parent out of six for breeding and deployment on a single site type would generate an expected gain of about 2-5% in height growth between ages 4 and 23 yr. 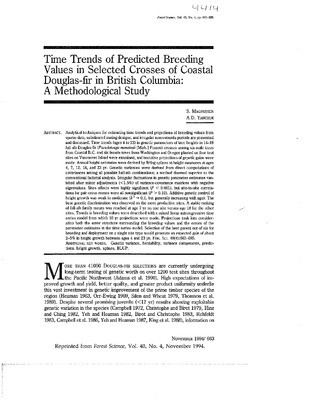