To determine the effects of laminated root rot (Phellinus weirii) on Douglas-fir (Pseudotsuga menziesii (Mirb.) Franco) foliar chemistry, chlorophyll a and b, N, P, K, Ca, Mg, Mn, Fe, and foliage moisture were measured in new and old foliage from 20- to 80-year-old coastal Douglas-fir. Measurements were made in June and September of 1993 and June of 1994. Chlorophyll a and b, Ca, Fe, Mg, and Mn were higher in old foliage in both June and September, while moisture, N, and K were higher in the new foliage. The relationship of P to foliage age changed with time. Reductions in foliage moisture, chlorophyll a, and N were consistently associated with P. weirii infection in all plots, but the normal high variability in foliage chemistry made demonstration of statistical significance difficult. Within-tree variability in foliar chemistry was much higher in June than in September, especially in the new foliage. 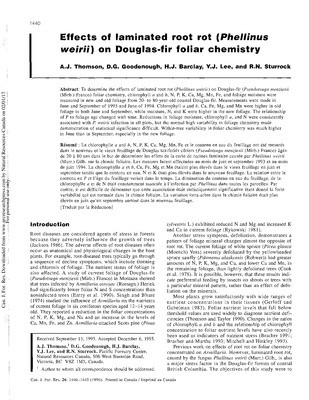