Eggs, larvae, and pupae of the western hemlock looper, Lambdina fiscellaria lugubrosa (Hulst), were sampled and related to the numbers of male moths captured in pheromone-baited Unitraps at 27 (1992) and 34 (1993) study sites throughout the coastal western hemlock and interior cedar hemlock biogeoclimatic zones of British Columbia. Male moth catches in traps baited with 10 µg of both isomeric 5,11-dimethylheptadecane and 2,5-dimethylheptadecane on a rubber septum lure were significantly correlated with larval and pupal counts within the same generation and were predictive of egg counts in the subsequent generation, suggesting that pheromone-baited traps could be used to monitor populations and predict future outbreaks. 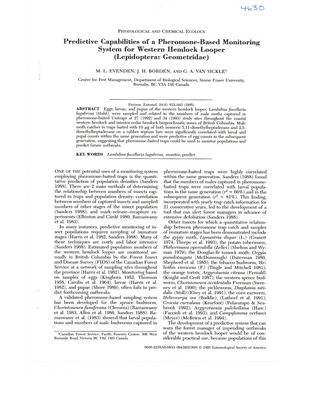