We studied the effect of salal (Gaultheria shallon Pursh.) competition on height, diameter and biomass growth and biomass partitioning in coniferous trees planted to a recent clearcut site of old growth western red cedar-western hemlock (CH) forest on northern Vancouver Island, British Columbia. Tree species used were western red cedar (Thuja plicata Donn ex D. Don), western hemlock (Tsuga heterophylla (Raf.) Sarg.), and Sitka spruce (Picea sitchensis (Bong.) Carr). Salal removal treatment was initiated at the time of planting in spring 1987. Plots were fertilized with 200 kg N ha-1 in spring 1991 and destructively sampled in fall 1992. Height growth from planted to 1989, in 1992 and total height growth were significantly greater in treated plots (salal removed) than in the control plots (salal remaining). Salal removal had a rather uniform impact on height growth for the three species tested. Total root collar diameter was 38% (P<0.1), 88% (P<0.05) and 65% (P<0.05) greater in the treated plots than in the control plots, for red cedar, hemlock and spruce, respectively. Exclusion of understory vegetation had resulted in biomass increases of all the components (namely in the 1-year and 2-year foliage and branches and the older than 3-year components and various sized roots) we studied. Improved tree growth in the treated plots was attributed to the reduced uptake and immobilization of N and other nutrients by the competing understory. Below-ground understory was found to be quite persistent to surviving even after a prolonged period (6 years) of above-ground understory vegetation removal.

Biomass allocation among the components studied was virtually unchanged by the presence of the competing understory, except in two instances. This result was quite different from most of the other reports on biomass partitioning under competition. Our hypothesis that salal competition for nutrients increases biomass partitioning to current year foliage and branch and roots was rejected. Unchanged partitioning is probably a way of response to nutrient deficiencies according to the resource depletion model of competition processes. Non-significantly higher biomass partitioning was observed in the 1-year foliar and branch and 0.25-1cm root components. It was therefore possible that the 1991 fertilization alleviated the nutrient shortage problem which led to the rejection of the hypothesis. 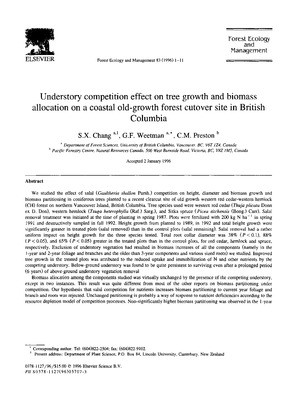