Successful Canadian field releases of the European tachinid fly, Ceranthia samarensis (Vill.), an endoparasitoid of the gypsy moth, Lymantria dispar (L.), are reported. With the exception of 1993, at least 200, and as many as 600, gravid female adult flies have been released each year between 1991 and 1996 in southeastern Ontario. Releases of parasitized host larvae and puparia of C. samarensis were also made. In 1992 and 1994, releases of gravid adult flies were made into large cages enclosing entire oak trees onto which young gypsy moth larvae had been released. In 1991, 1995 and 1996, free releases of adult parasitoids were made, although trees in the immediate vicinity of the release were seeded with susceptible age-classes of gypsy moth larvae. Each year of assessment, evidence of successful parasitism by field-released females was observed. Retrieved progeny of released flies were all in diapause. Experimental exposures of diapausing, pharate adult C. samarensis to overwintering conditions in the release sites showed that overwinter survival of the parasitoid can be expected to be quite high in Ontario. Most observed mortality was the result of local predators, parasitoids, and disease organisms. A monitoring programme to confirm successful establishment of the biological control agent is now recommended. 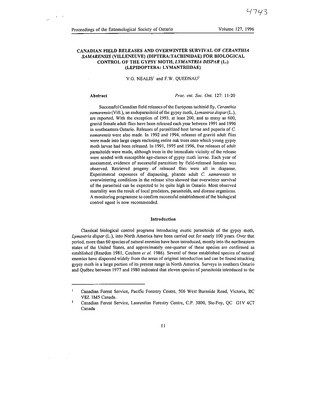