We combined the advantages of litter-basket and microcosm techniques to study the decomposition of 15N tagged Douglas-fir litter and uptake of labelled N by poplar plants. This was done in microcosms in the greenhouse under artificial summer and winter conditions. The microcosms contained litter baskets that excluded certain soil fauna based on body size. Litter baskets of varying mesh-size containing 15N-enriched defaunated litter were embedded in a simulated coniferous forest floor of unlabelled organic and mineral soil layers. Four litter-basket treatments were established: 1, 5 mm mesh allowing entry of all fauna, but macropredators were excluded; 2, 5 mm mesh, but macropredators were included; 3, 0.5 mm mesh with entrance for mesofauna only; and 4, 48 µm mesh allowing only the microfauna to enter the baskets. After 40 weeks, the development of faunal populations outside the litter baskets was similar in each treatment, except for the absence of macropredators and a greater number of millipedes in treatment 1. Fauna colonizing the litter baskets clearly differed among treatments. No treatment differences were detected in plant biomass and in the uptake of total-N by poplar. However, the 15N content in treatment 4 plants was significantly lower than in others. On a simple net loss basis, significantly larger amounts of the N and litter remained in the litter baskets with the 5 mm mesh than with smaller mesh (treatments 3 and 4). However, the dilution of 15N in litter baskets indicated translocation of external organic matter into litter baskets, confirming the limitations of conventional litter bag methods that use N content and gravimetric measurements only. After including translocation and adjustment of 15N content in litter baskets and surrounding pot soil, actual losses of N and mass were reversed: treatment 3>1>2>4, with treatment 4 being significantly less than others. Top predators had no apparent influence on any of the functional variables measured, suggesting that nutrient dynamics are mainly regulated by interactions occurring near the base of the detrital foodweb. 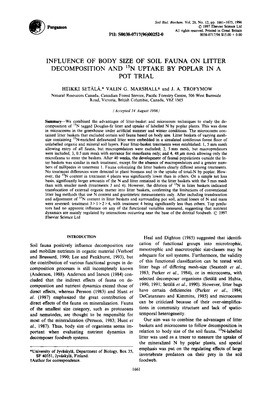