Studies to determine levels and impacts of soil disturbance caused during root-disease control by stump removal were initiated on a cutover on southern Vancouver Island immediately prior to the control operation and the establishment of a plantation of Douglas-fir (Pseudotsuga menziesii). Soil surface condition was assessed on the stumped area. Soil disturbance was measured at 699 planting spots. Vegetation development was assessed at 10% of the spots. Of all planting spots, 180 were undisturbed soil, 277 deposits and 242 gouges.

The soil, a gravelly sandy loam, increased naturally in soil density with depth from 1.05 Mg/m3 at the surface to over 1.60 Mg/m3 at depths more than 40 cm. Disturbance did not significantly increase soil density. Unlike previous studies of this nature, ease of soil penetrability was increased by the stump uprooting disturbance and vegetation development was not greatly dissimilar between disturbed and undisturbed soil. The relatively low soil impacts were attributed to the ability of the excavator to pile stumps without pushing topsoil, and the low site sensitivity to compaction. These low impacts on soil and reduced vegetative competition on disturbed soil resulted in tree growth rates which were significantly greater after 10 years on deposits (12% in height and 18% in diameter) and gouges (6% in height and 8% in diameter) than on undisturbed soil. 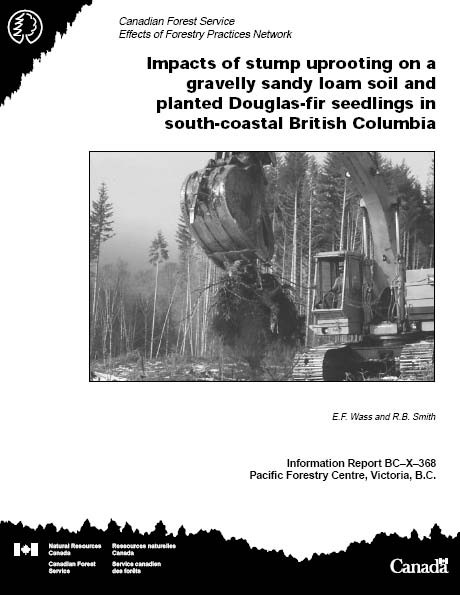