A monitoring program for the obliquebanded leafroller, Choristoneura rosaceana (Harris), on raspberries, Rubus idaeus L., was developed in the Fraser Valley of British Columbia during the growing seasons of 1994 and 1995. Data from weekly samples indicated that usually larvae were distributed randomly. The mean number of larvae per plant (m) was significantly correlated with the proportion of uninfested plants (po). For both the overwintering and the summer generations, larval density was estimated by using the equation ln (m) = 0.1326 + 0.999 ln [-ln (po)]. Data from pheromone trap captures showed 2 generations per year. Pheromone traps near field edges caught significantly more moths than those in the center of the field. Nonsticky Unitraps tended to catch more moths than sticky wing traps, but the differences were not significant. Trap catches were not correlated with larval density, indicating that pheromone traps cannot be used to predict larval density. However, the date of 1st moth catch in pheromone traps and subsequent daily temperatures can be used to predict when larvae of the summer generation will occur. 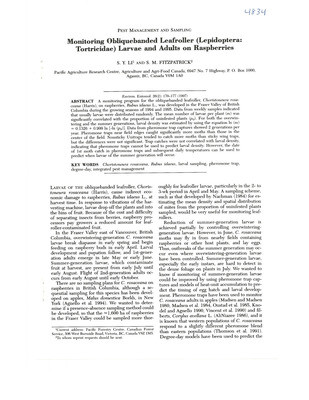