Proximate analysis is often used in decomposition studies to characterize the organic components of foliar litter. The percent weight residue remaining after extraction by nonpolar and polar solvents and H2SO4 hydrolysis (Klason lignin, KL) is commonly used as a measure of litter quality and a modelling parameter. While KL is associated with resistance to decay, its nature is not well understood and it has long been suspected that it incorporates nonlignin components. We used solid-state 13C nuclear magnetic resonance (NMR) spectroscopy to characterize litter, extracted residue, and the KL fraction of five species. NMR shows that cutin and condensed tannin are both significant components of litter and its extraction residues, in addition to lignin and carbohydrate. Hydrolysis with H2SO4 removes carbohydrates and amino acids, leaving the KL fraction derived from cutin, tannin, and lignin. Tannin retention in KL was also demonstrated by a hydrolysis study of purified tannins and a brown-rot lignin, using both NMR and the proanthocyanidin assay for condensed tannins. Although the NMR results are qualitative at this stage, it is clear that KL has limited use as a parameter controlling litter decomposition, and that other biopolymers should not be ignored in conceptual models, chemical analysis, and experimental design. 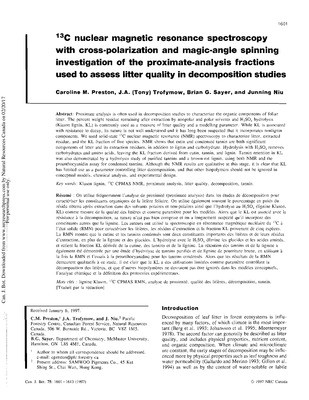