We examined trends of coarse woody debris (CWD) abundance in chronosequence plots established by the Canadian Forest Service on the drier east side (CWHxm subzone) and the wetter west side (CWHvm subzone) of southern Vancouver Island. Overall, total biomass of CWD on the east side was substantially (and significantly) lower than on the west side. Mean total biomass in the chronosequences ranged from 17 Mg/ha to 38 Mg/ha on the east side and 65 Mg/ha to 191 Mg/ha on the west side.

We found that total biomass of CWD followed a U-shaped curve over the chronosequence in three of four sites on the west side (CWHvm), while no overall trend was detectable for total biomass in the east side (CWHxm). Further, in both subzones, CWD was skewed to lower decay classes in younger stands, and more normally distributed in older stands. On the east side, CWD in young stands was biased to small size class CWD, and more uniformly distributed in older stands. Conversely, on the west side, CWD tended to be biased to larger size classes in all age classes. Finally, on the east side, Douglas-fir was the most common species among classified CWD; on the west side, western hemlock and western redcedar were most common.

On both the east side (CWHxm) and west side (CWHvm), variance in CWD loadings among plots was substantial. This may have limited our ability to detect some trends, and suggests that other factors besides those examined in this study influence CWD abundance. Finally, it is possible that the regenerating, immature and most mature stands examined in this study are not following the same developmental trajectory as old stands because they were initiated after harvesting while old stands were initiated after natural disturbances. Further studies comparing CWD characteristics in harvested and naturally disturbed stands would improve understanding of the differences in CWD dynamics that result from different disturbance types. 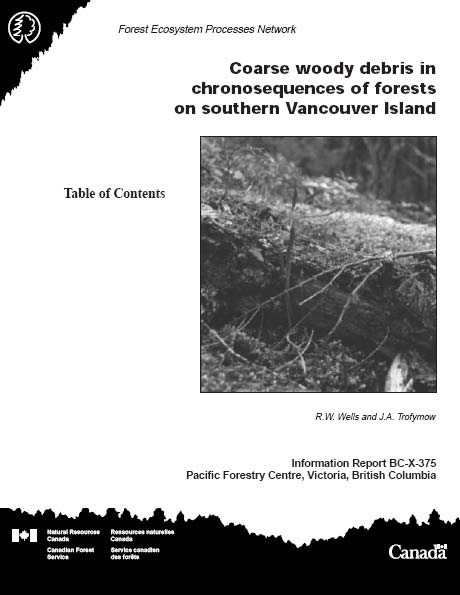