Lack of genetic markers has hindered the study of the mating system of Cronartium ribicola, an exotic forest pathogen infecting natural and cultivated white pines throughout North America. Isozymes, randomly amplified polymorphic DNA (RAPDs), and restriction length polymorphisms (RFLPs) were used to study the mating system of this rust. Heterozygosity (outcrossing) in diploid telia was demonstrated by analysis of cultures derived from the meiotic products (basidiospores) of individual telia. Families of basidiospores cultured from single telia were used to test for Mendelian segregation and for conformance of loci to Hardy-Weinberg equilibrium. A total of 18 polymorphic loci were identified with the three marker systems. All except for three RAPD loci showed Mendelian segregation in the single-telium families. To quantify the level of outcrossing, gene and genotype frequencies were calculated for families from a single population. Up to 24 families were surveyed with isozymes, 14 with RAPDs, and 18 with RFLPs. Except for one isozyme locus (MPI) in one sample, all 14 loci tested with these families were in Hardy-Weinberg equilibrium, indicating random mating. Further studies, with a different sample from the same population, showed all three isozyme loci to be in Hardy-Weinberg equilibrium. The three marker systems were consistent as to the amount of variation detected. Resistance selection and breeding programs must consider the implications of genetic recombination that outcrossing affords the rust. 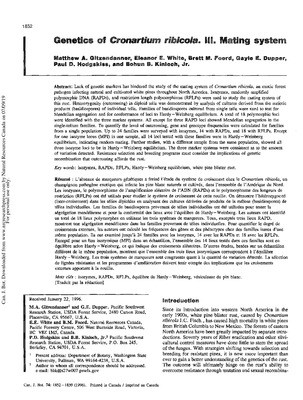