In 1986, a field trial was established to test options for brushing young, shrub-dominated Engelmann spruce plantations in the moist warm Interior Cedar Hemlock biogeoclimatic subzone of British Columbia. Twelve 60 m ¥ 60 m treatment plots were established in a randomized complete block design for three replicates of four treatments. Percent cover and height of thimbleberry, raspberry and fireweed was assessed before and up to five years after treatment. Conifer height, diameter and condition were measured before and up to ten years after treatment. Of the three treatments compared to an untreated control, broadcast application of glyphosate in late August at 1.8 kg a.i./ha was most effective in reducing cover and height of the major target complex. In comparison, manual cutting and broadcast application of 2,4-D amine at 3.0 kg a.e./ha had minor and short-lived effects. Engelmann spruce seedlings responded positively to reduction of cover and height of the target vegetation complex. Indicators of competitive stress, including seedling height:diameter ratio and competition index, were reduced following glyphosate treatment and remained at lower levels relative to all other treatments tested throughout the measurement period. Conifer height and diameter growth curves for the four treatments diverged over time, with seedlings in the glyphosate treatment growing at a faster rate than seedlings in all other treatments. Plots left untreated, manually cut, or treated with 2,4-D amine failed to meet minimum stocking standards in an operational silviculture survey conducted in 1993, eight years after treatment. By July of 1994, the plots treated with glyphosate satisfied all criteria for stocking, freedom from competition and annual growth rate set as standards for successful plantation performance in the ecosystem-specific guidelines of the Forest Practices Code of British Columbia. 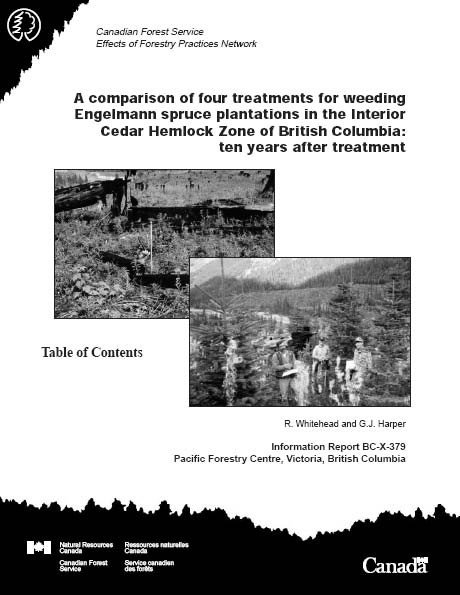