We investigated soil factors and tree growth on sites that were clearcut during the 1970s and early 1980s and were subsequently site prepared with either blade scarification (blading) or prescribed fire (burning). Tree growth rates, evaluated as the mean internode length for the five years above breast height, were slightly higher for sites treated with blading than for those treated by burning. Differences in the concentrations and contents of soil C, N, P, K, Ca, Mg, and micronutrient cations between blading and burning treatments were generally not statistically significant. Contents of soil C, N, P, K, Ca, Mg and micronutrient cations for bladed sites were lower than for sites where no site preparation had occurred. Soil bulk density for all treatments was generally below the threshold where impaired tree growth is expected. Trees growing on bladed areas had higher concentrations of foliar N and P than trees growing in areas treated with burning. Foliar N levels were indicative of N deficiency for trees from both blading and burning treatments. The sites we examined were older (15-20 years) than many areas that have been studied to evaluate the effects of site preparation in the central interior of British Columbia. Although productivity appeared satisfactory at the time of this study, continued monitoring of the areas is recommended because of large nutrient losses that have occurred as a result of site preparation. 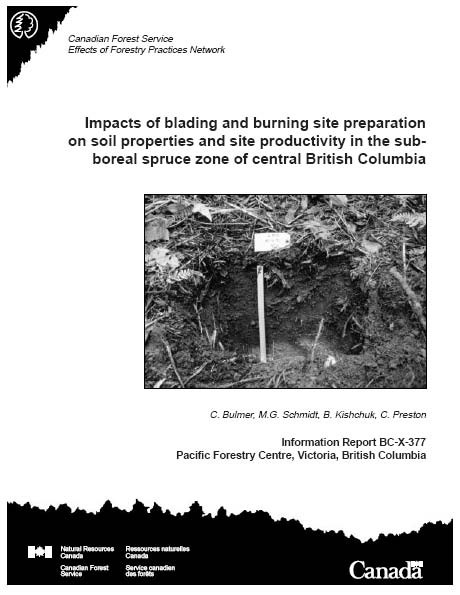