Climate impacts on productivity and health of aspen 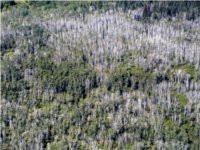 Trembling aspen, also known locally as “white poplar,” is the most abundant deciduous tree in Canada’s boreal forest, where it is important both ecologically and commercially. Aspen is also the main tree species in the parkland zone along the northern edge of the Canadian prairies. Recent severe droughts have led to widespread dieback and decline of aspen and other types of forests across large areas of west-central Canada, prompting concerns for the future in a changing climate. The Climate Impacts on Productivity and Health of Aspen (CIPHA) study includes a network of 180 research plots to track dieback and changes in the growth of aspen forests across this climatically sensitive region. A key component of this research is the application of user-friendly indicators of soil moisture for historical analyses and mapping of drought severity nearly in real time. The work includes annual assessments of forest health (for damage by insects and fungi), analysis of tree rings, and development and application of remote sensing indicators for mapping aspen dieback. The CIPHA study also includes collaboration with tower-based research into climate impacts on forest carbon cycling at an aspen site in Prince Albert National Park, Saskatchewan, that is one of the Boreal Ecosystem Research and Monitoring Sites (BERMS).

Tree-ring analysis showed that the region’s aspen forests have undergone dramatic growth collapses in the past, following periods of drought accompanied by defoliation by forest tent caterpillar and other insects. In 2001–2002, an exceptionally severe and widespread drought led to massive dieback of aspen forests in the parklands of Saskatchewan and Alberta. Analyses from CIPHA research revealed an estimated 45 million tonnes of dead aspen biomass within the most severely drought-affected area. This corresponds to Canada’s total harvest of hardwood tree biomass over two years. The carbon content of the dead aspen is equivalent to about 7% of Canada’s annual fossil fuel emissions, illustrating the importance of drought to the carbon cycle. Thus, CIPHA study results are being used in a related initiative to include drought effects in the Carbon Budget Model of the Canadian Forest Sector.

The continued tracking of forest changes in the CIPHA plot network has shown that the yearly rate of aspen stem death has remained remarkably high since the drought of 2001–2002, partly because of consequent damage by wood-boring insects. Similar impacts of this drought are being reported from the western United States, where “sudden aspen decline” has emerged as a major concern. Since 2002, a pattern of rotating, severe droughts has been documented across large areas of North America. These droughts may contribute to the widespread browning and decline of forests reported recently in northern Alberta, northwestern Ontario, and elsewhere. In recent years, drought- and heat-induced forest dieback has emerged as a global issue, highlighting the value of integrated systems for tracking and understanding large-scale, climate-related changes in our forests.