Pinewood nematode (PWN), Bursaphelenchus xylophilus, is the causal agent of pine wilt disease. This nematode is native to North America and is found in pine, but the pine wilt disease is not found in Canadian forests. However, PWN has resulted in extensive tree mortality in countries such as Japan, Korea, Taiwan, China, and Portugal. The movement of logs, untreated wood products, and wood packaging material is considered to be a significant pathway for the international spread of PWN when its vectors, pine sawyer beetles (Monochamus spp.), are also present. Consequently, to prevent further spread and new introductions, PWN is regulated by some countries as a quarantine pest. The phytosanitary regulations for PWN can endanger market access of Canadian wood products, and thus to comply with international regulations and prevent the movement of PWN to other countries, accurate techniques for the detection and identification of living nematodes are required. 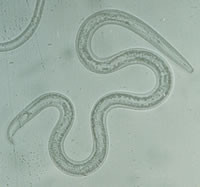 Traditionally, diagnosis of PWN has been based on methods that rely on morphological traits. These methods are complicated by the inability to distinguish the juvenile stages of the species and confusion with a morphologically similar and innocuous species, B. mucronatus.

To address this problem, Dr. Leal and her team at the Canadian Forest Service’s Pacific Forestry Centre and her collaborators at the Canadian Food Inspection Agency have developed molecular diagnostic methods that can effectively determine the presence of PWN in wood, based on both traditional and real-time polymerase chain reaction (PCR). Both PCR assays use heat-shock protein-70 (hsp70) gene sequences specific to PWN. Hsps are a group of heat-inducible proteins that are expressed in cells under stress. Because hsp70 PCR-based assays are highly sensitive and species-specific, they surpass morphological techniques for PWN diagnosis.

Dr. Leal has demonstrated the practical application of these hsp70 PCR-based diagnostic methods for the detection of PWN in wood samples of lodgepole pine with an unknown population of Nematoda. These assays differ from other reported PCR-based methods in that they clearly identify PWN in the presence of potential PCR inhibitors, such as phenolic compounds, associated with wood. Thus, these methods bypass the need to produce pure nematode samples through further isolation and separation of the different nematode species, and/or culturing of nematodes.

This research is gaining international recognition and is critical for the use of molecular tools for PWN detection for global phytosanitary purposes. It is providing Canada with a powerful method of certifying that our forestry products are free of live nematodes, hence supporting market access for Canadian wood exports.